Get fresh music recommendations delivered to your inbox every Friday.

Rocks On The Soul 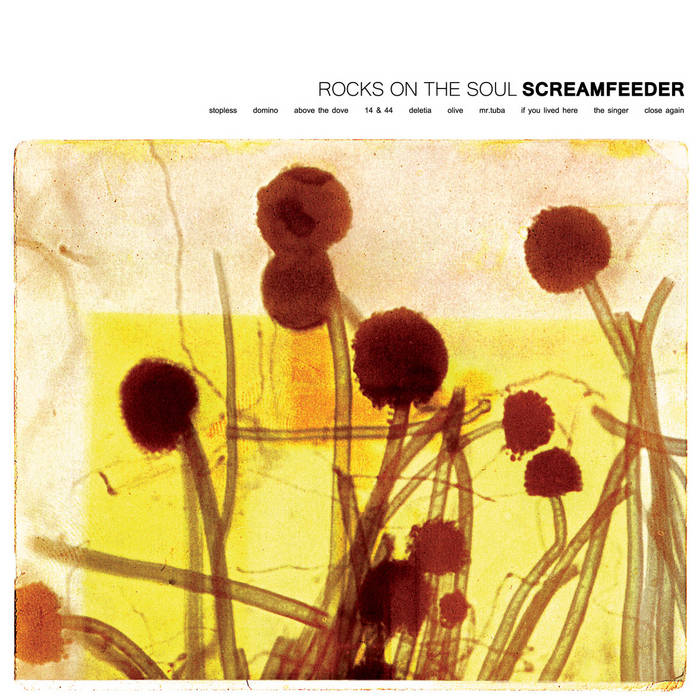 “Whether you want the depravity of the post-punk noise, the sweetness of a soothing pop song, or something in between, on Rocks on the Soul they deliver. I'll give this an A-“. (In Music We Trust)

Throughout the 1990’s, Australian music in the post-grunge area exploded in popularity, fuelled by the excitement of the new punk DIY ethos and the sheer excitement of independent, non-corporate bands making thrilling new sounds.

But by 1999 Screamfeeder found themselves backed into a corner by their American record label at the time, being legally prevented from recording a follow-up album to their 1996 smash Kitten Licks.

The covers EP Home Age had filled the gap, but the band were sitting on an ever-increasing pile of diverse new songs. In the end, they found a way to opt out of the disastrous contract and arrangements were promptly made for a recording session in the winter of 2000.

The studio and producers were an odd choice, a discreet office location in Melbourne’s South Yarra owned by electronic duo The Pound System. It turned out to be perfect - Woody and The Rev could hear new potential for the band’s trademark male-female vocal interplay, sweet yet bruising guitar lines and never-sitting-still song structures.

Together the team proceeded to deconstruct Screamfeeder’s approach while exploring the possibilities offered by the then- new Pro Tools digital recording platform.

It was a bold move; it would have been too easy to make ‘Kitten Licks II’, but instead the band turned a sharp corner and produced a quite-unexpected album.

The songs are sprawling and hyper-melodic, layered, edited and experimented with. Vocals are lush and the melodies emphasised, drum beats are looped and hypnotic. This was the sound of a band confident enough with their songs that it didn’t matter the sonic tangents they took off on.

“…At the time, it sounded like it was too good for a band from Brisbane, which is never true — of anywhere — but that’s how Screamfeeder made me feel. I was excited by it. It was probably the last time I felt truly shocked by what a Brisbane band was capable of. Now everyone knows.” (Ian Rogers)

Tim came up with the album title, a play on The Isley Bros ‘60s LP Soul on the Rocks. The album alienated some of the more change-resistant fan base, while engaging with a whole new one, who were captivated by Kellie’s epic Stopless, or the quasi space-age Above The Dove. Dean explored the local area and added his field recordings to some of the songs, notably If You Lived Here.

Finally released in October 2000 through Shock Records, the album was a masterful return to form, showcasing a set of songs that quite clearly raised the bar, from the first notes of masterpiece Stopless to the emotive closer, Close Again. If there’d been any doubt about the band’s ability to survive the industry travails, Rocks On The Soul proved them all wrong.

And here we are in 2015. Exactly 15 years later and Rocks On The Soul remains a pre-shoegaze-comeback gem. The songs and ideas are at once confident and assured, but never cocky, with Screamfeeder’s naiveté and wide-eyed wonder and love of the music they were creating shining through.

Recorded by The Pound System at Bustin’ Up Studio, Melbourne, in June 2000. Produced by Woody, The Rev and Screamfeeder. Released on Shock Records / The Hypnotized Label on October 30th 2000.

All songs written and performed by Tim Steward, Kellie Lloyd and Dean Shwereb, with The Rev on Keys, Guitars and Samples, and Leo Mullins, Ollie Brown and Brendan Webb on backing vocals.

Lovers of loud and beautiful music since the day they were each conceived, they have been compared to all the greats; Husker Du, The Jam, GBV and The Who.

Comparisons aside they rock in their own unique / sublime / chaotic way.

Contradictions and dualities abound within Screamfeeder, and therein lies their beauty ... more

Bandcamp Daily  your guide to the world of Bandcamp